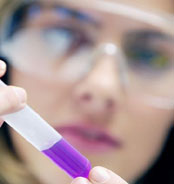 Under the EU REACH regulation (EC No. 1907/2006) it is required for substances which are produced and/or imported in tonnages at or above 10 tons per year and which have been identified as being "hazardous" (according to 67/548/EEC), to develop so-called "exposure scenarios". An integral part of these exposure scenarios is the estimation of exposure for all relevant routes. For workers, the inhalation and dermal exposure route are commonly assumed to be most relevant.
The relevant guidance (PART D, R.12 & R.14) foresees to assess occupational exposure on the basis of process categories (PROC). These PROCs may be seen as surrogates for specific process steps/tasks/workplaces.
To assess occupational exposure, the guidance foresees a "tiered approach". For the 1st tier, it is proposed to use so-called "screening tools". These tools provide conservative estimates of exposure and are meant to identify (screen) unproblematic PROCs in order to save resources to be allocated to PROCs for which higher tier assessments are needed.
As being one of the available 1st tier exposure assessment tools, the guidance promotes the use of the ECETOC targeted risk assessment (TRA) tool (ECETOC, 2009). This tool has been developed to assess exposure to volatile and non-volatile substances. It provides initial exposure estimates on a PROC-specific basis. For each PROC, exposure values are selected from a "look-up table" according to the selected/assigned "fugacity class". The initial estimates can be refined by several parameters (such as the frequency and duration of exposure, the presence of a local exhaust ventilation (LEV) etc.).
Since the TRA tool aims on a very broad applicability, shortcomings in the application to specific problems are inevitable. In particular for the assessment of exposure to metals and inorganic substances, the tool fails to reflect some of the specific needs for those substances.
On behalf of EUROMETAUX, EBRC has therefore developed a tool for the estimation and assessment of substance exposure (MEASE) which combines approaches from the EASE expert system, from the TRA tool and from the health risk assessment guidance for metals (HERAG). It aims on providing a 1st tier screening tool for the estimation of occupational inhalation and dermal exposure to metals and inorganic substances.
For inhalation exposure, the tool follows the PROC-specific approach of the TRA tool and selects initial exposure estimates from three so-called "fugacity classes". The initial exposure estimates for PROCs 21-27a in MEASE are based on measured data from the metals industry. Risk management measures (RMM) are based on a publication of Fransman et al. (2008) who screened and analysed more than 400 publications for data on the efficiency of RMMs. As a result, MEASE gives users the possibility to choose between several RMMs instead of just having an LEV as an implemented RMM.
For dermal exposure, MEASE is based on the classification system of the broadly used EASE system. The exposure estimates are however based on real measured data for several metals. These measurements have been collated and plotted against the EASE exposure classes in the "dermal factsheet" of the HERAG project. That factsheet concluded on a system of exposure bands which are proposed to replace the EASE estimates within its own classification system. These conclusions have been taken up in MEASE.

EASE for Windows 2.0: A system for the estimation and assessment of substance exposure (EASE), Version 2.0, August 1997, developed by the health and safety executive (HSE), UK in conjunction with AIAI, Edinburgh.